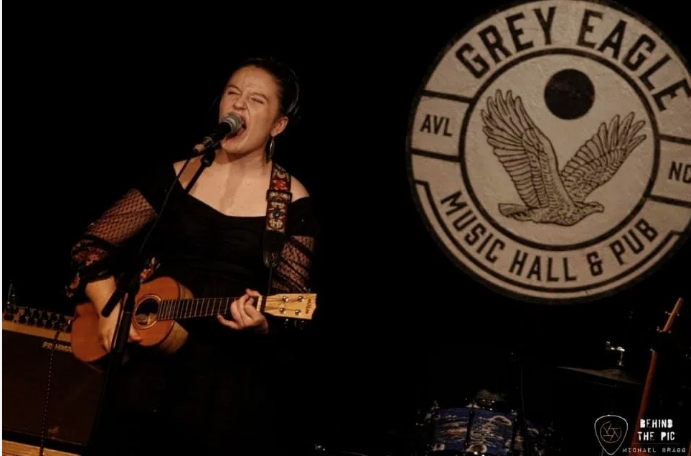 Asheville, NC (June 9th, 2019) – Having just turned 15yrs yesterday (June 8th) Emi Sunshine was welcomed to the Grey Eagle stage in Asheville, NC by a room of fans singing “Happy Birthday” in unison. With a big smile, Emi thanked the crowd before she sang her first notes. Backed by her family band with Dad Randall Hamilton, Brother Johnathan Hamilton and Uncle Bobby Hill the group opened the show with “Blue Skies” drawing the crowd in with skillful playing and Emi’s natural country twang, yet soulful voice.

Asking if those in attendance would like to hear a brand new song Sunshine spoke of a venue in Dahlonega, GA that she frequently plays. With the venues name lending itself to the song title, “Crimson Moon” Emi told of the establishment’s inspiration for the new tune and how a fan suggested she should write about it.

Going on to play other songs such as “Strong Armed Robbery” from her latest album release “Ragged Dreams” and “Family Wars,” where she joked that the second line was not about her own grandmother, Emi and band entertained the crowd with true country and bluegrass music as many fans sang and clapping along.

With the song “Ninety Miles” Sunshine took time to make mention of her friend Will who has autism. The song’s topic touching on how those with disabilities see the world and shouldn’t be outcast was welcomed with a standing ovation.

Mid-set the group included a cover of the Johnny Cash classic “Folsom Prison” before the band left the stage where Emi followed with a solo performance of the Jason Isbell song “Relatively Easy.” Continuing on with a few solo songs such as “Give Me Grace” and the brand new “Politician’s Dance” Emi’s Vocal abilities were front and center. From a raw dirty grit reminiscent of Janis Joplin to soft and delicate that can provide an emotional heartfelt performance of songs like “Broken.” This song bringing a lady next to me to tears with the line “your family loved you but not enough, they left you broken.”

The band returning to the stage with “Danny Ray.” and ”Oh Caroline” where brother John shared in some of the lead vocals before closing out with a cover of “Somewhere Over The Rainbow.” Providing her own twist to the song Sunshine took it from the soft and smooth melodic familiarity building to an upbeat bluegrass almost rock-like performance.

Throughout the show, Emi Sunshine provided joyful banter amongst her family band along with many stories and insight to her songs showcasing a maturity for her young age. While most her age are consumed with video games, TV, iPads, etc Sunshine provides a fresh air of positivity and an adult like outlook on today’s world and is able to capture those things in song in a way where many people can relate. It is easy to see that despite her rise to fame at 9yrs old as a YouTube sensation to an appearance on Little Big Shots with Steve Harvey that Emi stays true to her roots with a kind-hearted soul and appreciation for her fans as was evident after the show taking time to meet with those who came out for the early matinee show.

See the whole story and gallery at: