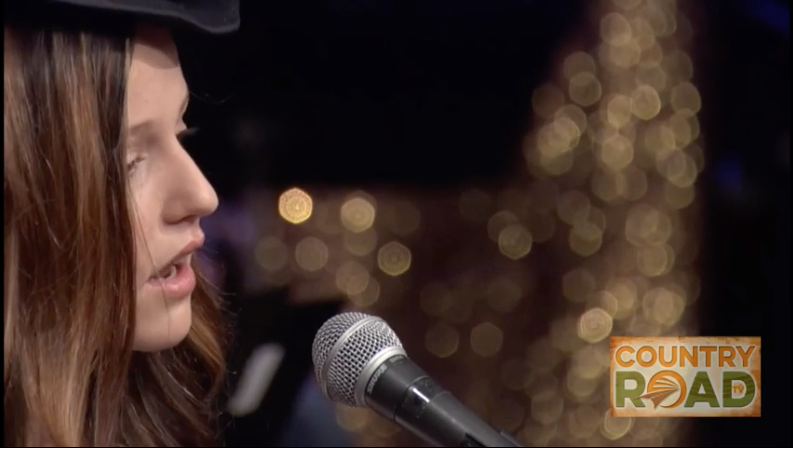 Critically-acclaimed global entertainer and singer/songwriter, EmiSunshine, returns to national television later this week. The fourteen-year-old Tennessee native, who performs more than 100 show dates a year and has been “seen on TV” more than a handful of times over the span of her young blossoming career [including “Pickler & Ben” and ”Little Big Shots (with Steve Harvey”) most recently] is set to appear later this week on “Country’s Unbroken Circle” (RFD-TV). Emi makes a special guest appearance performing her original tune, “When It Comes To Me,” in the episode scheduled to air on Friday, November 30, 2018, at (7:00 PM CST/8:00 PM EST). Emi is spotlighted in a second showing in the “Country’s Unbroken Circle” series once again on Friday, December 21, 2018 (7:00 PM CST/8:00 PM EST). She performs “I’m So Lonesome” alongside one of her own personal musical heroes, “The Queen of Bluegrass,” Rhonda Vincent.
“The room was filled, on tape date, with so many folks whom I admire (Ray Benson, Gene Watson, Jimmy Fortune, Linda Davis, Deborah Allen, Jeanie Seeley, Whispering Bill Anderson, Jim Lauderdale, and Duane Allen); it was an awe moment for me,” said EmiSunshine. “…and to sing with Rhonda Vincent was another special career experience; I truly admire her.”
EmiSunshine has also appeared in a number of motion picture films. An EmiSunshine signature tune is highlighted in the soundtrack for the award-winning documentary, “The King” (Eugene Jarecki/May 2018). Emi makes a cameo appearance in the film among a colorful cast of characters, most notably, Steven Baldwin, Ethan Hawke, James Carville, Emmylou Harris, John Hiatt, and Roseanne Cash. The film was recognized at the prestigious Sundance Film Festival and premiered at Cannes Film Festival where Emi performed. Of late, EmiSunshine was invited to record a duet with Grant Maloy Smith; the two recorded the twangy novelty song titled “Fly Possum Fly.” The single was released to American radio stations to be enjoyed this holiday season (Suburban Cowboy Records).
In preparation for the release of her next recording project, Emi is currently in the studio working with renowned country music producer Tony Brown who has more than 100 No. 1 songs to his credit and has enjoyed $100 Million in album sales.