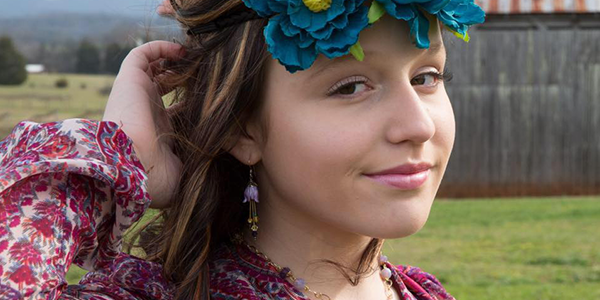 EmiSunshine is a musical force to be reckoned with

Prodigy is a strong word, so much so that in the last five or six years I’ve only used it once in my writing. Today, I’m not sure if it’s strong enough because little EmiSunshine from Madisonville, Tennessee is a prodigy and then some.

Every few years a child star comes along with a big voice and makes a splash, but usually, they have handlers and producers, people who set the stage for them to “get up there and sing.” This thirteen-year-old requires no such packaging, however.

She writes her own music, produces her own songs, plays her own instruments, and she does it all with a level of sophistication that would be remarkable in someone twice (or even three times) her age.

Her voice, strong, clear and emotive, lands somewhere between Dolly Parton and Reba McEntire in its tonal quality and her playing is on par with any seasoned veteran of the stage.

Either of these points would be remarkable on their own, together it’s downright spooky, and yet as impressive as that is, it almost pales in comparison to her songwriting ability.

Her effervescent nature in interviews—Sunshine is a perfectly descriptive moniker—is counterpointed brilliantly by the maturity of her lyrics and subject matter.

“I’m pretty sure that most folks expect me to write and sing about rainbows, butterflies, and unicorns, but that’s just not me. I like to write about things that are real and life just isn’t pretty sometimes…that’s just the way it is.”

True to her word, Emi writes about classic themes of love, murder, and deceit, but also demonstrates a grasp of social issues covering topics like abuse, autism, incarceration, and tragedies like the Gatlinburg fires.

It isn’t all heavy material; she has a fun side too with songs like “Porter Wagoner Blues” and “Strong Armed Robbery”, a ghost story from the perspective of the ghost. “Johnny, June, and Jesus” is a reminiscence of her beginnings as a street performer, busking for tips.

References to Johnny and June come as no surprise considering the young lady’s musical family who serves as her backing band, The Rain. Emi got her start, as many musical child geniuses do, playing churches, festivals, picnics and anywhere she could find a place to stand and sing.

A performance at a 2014 Flea Market was captured on video and immediately went viral on YouTube, catapulting the Tennessee treasure to international fame with 14 million current followers. Since then she’s managed an average of 50+ shows a year with an upcoming appearance here in Chattanooga at the May 25th Nightfall concert.

Her latest recording, the fifteen track compilation of roots, country, and Appalachian folk tunes, came out last August. Her music also can be found on YouTube (naturally) and at theemisunshine.com.

While this may be the first time you’ve heard of Emi, I guarantee it won’t be the last. For someone so young to possess such talent, drive and ambition with literally every aspect of her career sewn up with professionalism, there is no question she is destined to be the next Country superstar.

Listen to her music now, see her when she comes to Nightfall, and one day in the not too distant future when she takes the Grand Ole Opry by storm, you can nudge your friends and tell them, “I saw her when…”

I’ve written about a lot of performers over the years, some famous, some on their way to being famous, but rarely have I had the pleasure of hearing and writing about such a sure thing as the imminent stardom of EmiSunshine.